The fifth meeting was held in Poznan – Poland.  Our school was the host not only for the teachers but also for students from Croatia.
Our guests visited school and the kindergarten, observed some lessons, shows and after that while sipping coffee and enjoying cakes (baked by Polish teachers) we exchanged thoughts and experiences. But visiting school wasn’t the only thing. We also did some sightseeing: the Old Town, the Cathedral, Ostrow Tumski. We had a meeting with a vice president of Poznan – Mr Dariusz Jaworski and our local council from Swierczewo district. We also went to Nowy Tomysl a town which has a long tradition of wickerwork. We visited a Museum of Basketry and Hop Growing and later everyone could try to make their own wreath.

During the meeting our partners visited the two school buildings belonging to our school – first the one in the village Glogovac, where the Womens’ society of Glogovac prepared for them a wineyard breakfast. The partners visited the children in the classrooms. In the main school building there was a school play, in which the children greeted each country – Italy with an Italian song, Latvia with a Latvian dance Oira, Romania with a children’s rhyme in Romanian, Spain with a dance Corrida and Turkey with a Legend of the Picok. Each class of our school had a lesson with some of our partners. They learned songs and talked about their countries. There was also the Easter card workshop and the coordinators meeting organized in the school.

The newspapers and television reported about the event.

During the meeting in Croatia the partners visited important sights: the cities Zagreb, Varaždin and Koprivnica, the Gallery of Naïve Art and the Gallery Josip Generalić in Hlebine and the most famous Croatian National Park the Plitvice Lakes.

The fourth meeting of our Project “Customs, Traditions and Art:A River Flowing Around Europe” started  from  October   2 to October 7 2014 in Adiyaman / Turkey.

The partners visited local authorities as governorship and mayorlaty of the  city . Partners visited our school and classrooms.Our pupils had an opportunity to speak English with some one face to face apart their English teachers.They also had an opportunity to have some pupils from other countries in their classroom for a while to have communication in English. Some of the families who has children in our school had a chance  to host pupils from Croatia. They also had opportunity to show our culture too.

During the free time the partners also visited the city , Perre and Nemrut Mountain .On the way to Cendere Bridge  and Arsemia.

In May the 24th the third meeting took place until the 29th. The partners could participate to the end of school year party, knowing parents and being present to children performances (folk dances, music, etc.) They were invited to a presentation at the town council, they visited the palace of the regional council and had the opportunity to meet both the city and the district councilors. They got informations about city and region administrative organization, with particular attention to the educational problems.
Children from the all schools prepared gifts to be exchanged during the meeting.
During the meeting the teachers decided the activities for the next year:
·        For the art product each country will prepare drawings and/or pictures regarding famous painters with a simple explanation. They could also prepare works about important monuments or sculptures and their history. (Deadline December 2013)
·        For the music product we will prepare a video where children can play some instruments or sing and dance. (Deadline December 2013)
·        For the calendar: each country will prepare no more than five pictures about the most important festivities in their countries. (deadline end of November 2013)
During the free time the partners also visited the city and some of the most important places regarding art, like ‘Pinacoteca Ambrosiana’, S. Maria delle Grazie, Duomo Cathedral etc.
On Sunday we organized a full-day trip to Venice. 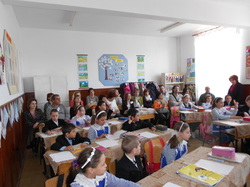 On 4-9 March 2013 Middle School "General Dumitru Damaceanu" Cosmeşti, Romania, hosted the multilateral Comenius project partners,”Cutoms, traditions and art: a river flowing around Europe ”(2012 -2014), funded by European Commission under the lifelong learning program.
This meeting was attended by 16 partner schools from Italy, Turkey, Croatia, Poland, Spain, Latvia. Headmasters, teachers and students of our school have welcomed the European guests in a formal framework. Partners were welcomed with bread and salt by school students dressed in Romanian folk clothes, the group of European partners liked this tradition.
As early March, a group of students offered trinkets, cards and snowdrops and also explaining the
significance of  "martisor” custom by the 1st of March.
Aims of the meeting were the development of interpersonal relationships that provide the basis for good socialization, improving the ability to communicate in English, the familiarity with educational systems of all countries involved in this project, familiarity with the Romanian customs and traditions and establishing responsibilities, activities and terms for the next mobility, the deadlines of final common products in the first
year and organizing workshops for teachers attending the meeting.
The meeting program included the following activities:
- Teachers visited the school spaces (classrooms, laboratories, library, teachers' room, secretarial services, accounting, sports) and had discussions with school students on various topics;
-Presentation of educational systems of all countries involved in the project and discussion of similarities and differences between them;
- Presentation of the different traditions of the spring season (production of ”mărțisoare”, cards, paintings, doilies gift that will be offered during the week – March 1 to 8) involving all partners in making bracelets, glass painting with colored sand, making greeting cards in workshops working with school students;
- Model lessons in mathematics and sport where partners had the opportunity to compare their teaching systems with the Romanian, the amount of knowledge that pupils have assimilated at the same level in their school, also had the opportunity to compare methods or means of teaching, to see and understand the educational system than the country of origin;
- Presentation of a little show by our students. They presented some important traditions in the area, traditional costumes, Romanian songs and folk dances and finally participants learned to dance a Romanian”hora” and also they ate donuts and cake as Romanian traditional sweets;
- Meeting with local authorities;
- Visit the Cosmeşti village and the village church;the Mausoleum Mărăşeşti where they had the opportunity to discover some of the local
historical past and how to celebrate Romanian heroes, the salt mine in Tg. Ocna and the mountain resort Slănic Moldova where partners have
found how to prepare some traditional Romanian recipes, the National Village Museum-true palace of art which has collections of ceramics, costumes, fabric interior, wood, furniture, hardware and rugs.
-Meetings in which they discussed progress of the project work done and future work.
For all participants was an extremely interesting experience and beneficial in terms of cultural, historical and relational, and we believe that we have contributed to extent the knowledge of the Romanian traditional values. In carrying out these activities of this project, as well as their goals have involved students, parents, teachers, administrative staff, local authorities and members of church. These contacts with other people, other schools, other countries, other cultures enriches us as a human beeing, our society in an exceptionally way. 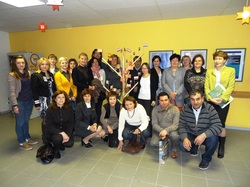 The first Comenius meeting was held in Latvia from 5-10  November. The venue of the meeting was Madona Secondary School No.1. The teachers and coordinators from Romania, Italy, Spain, Turkey, Croatia, Poland came together to clarify the details and plan the following activities for this year. The presentations of the countries and schools were shown during the meeting and the obtained information was disseminated. The presentations were offered to teachers and students. Not only younger children but even elder students were interested in them.
The visitors were welcomed to participate in the lessons, to tell students about their countries un teach some phrases in their languages and communicate with students in English. It was important for Latvian students.During the short trip around Madona the cultural and educational possibilities were represented. The guests visited  Music, Art, Sport Schools situated in Madona.
A lot of students from Madona Secondary Schools and Madona region attend these schools after lessons. The local authorities spoke about  the history of Latvia and the region, the economy, education, future plans and development. A logo that  was created in Turkey was chosen as the official Project logo from seven offered samples.The participants of the meeting were acquainted and took part in some Latvian traditions and celebrations such as Martiņ`s Day (Mārtiņi) and the  Heroes` Rembrance Day (Lāčplēša diena) and visited some important sightseeing places what students usually visit during the school year.

A wonderful experience – the past and the presence, Latvian food and the Latvian folklore – that’s what we were invited to by our dear Comenius partner from the Madona Secondary  School No:1  in Latvia. Mrs Arnita Krigere, a teacher, who co-ordinates the project “Costums,Art and Traditions; A river Flowing Arround the Europe ” in her school, arranged the meeting. Thanks to her and her extraordinary colleagues we could not only sit down at the table to exchange each other’s ideas about the next stages of the project, but also meet the always smiled kids, who learn in the school,meet the mayor of Madona and talk to him about the town and the Project, establish the friendship with the great people of international and multilingual community in a very warm and friendly atmosphere, and have many other attractions, we’re very grateful. We are all sure, that this visit let us co-operate better and expand the Comenius projects in our countries.

We welcomed the members from different countries to our school where we had some presentations and a tour of the school grounds. The teams had some opportunity to see the famous horse show "Cómo bailan los caballos andaluces" ("How the Andalusian horses dance") in the Equestrian Art School. They were also able to enjoy one of the most famous wineries in all of Andalusia, Gonzalez Byass. On the first afternoon we took a boat from El Puerto de Santa María and arrived in the city of Cádiz where we were able to visit some of the iconic sites of the city.

We met the local authorities in the town hall, which offered us a beautiful view of the most picturesque places in the city.

We made several visits to nearby towns such as Vejer de la Frontera and Sanlucar de Barrameda, where we were able to visit some of our  beaches.

On the last day of our meeting we did different activities in the school, we had classes in different languages, where the students were able to learn basic notions of the languages of the different countries of the project, and we could also see, through the use of Power Point Presentations, where each Comenius Team lived. Furthermore, they took part in an art and crafts class where the different countries learned how to use a water colour technique to make bookmarks with the logo of our project.

Finally, we were able to enjoy a fantastic time in the "Feria del Caballo de Jerez", where there was horses, singers, dances and typical flamenco dresses. The teams were able to have a first eye account on how the Spanish people live and enjoy themselves in one of the most famous ferias in Andalusia.